It is a tradition from Mia and me to scape for holidays to Peru, on Christmas eve, just the next day after closing the doors of Cafetoria. This time, however, the trip did not start well: KLM personnel did not allow Mia to get onboard. Her passport was going to expire in less than 6 months which basically means that no inter-oceanic flights are allowed in such conditions. A heavy stone felt on us on that early morning of December 24th. What should we do now? Will we stay in Finland during Christmas? If we beg KLM to let us go, will Peruvian Customs let us in?  Still in shock, and knowing that everything was still uncertain, we decided that I will take the flight to Peru and Mia will stay in Finland hoping that Finnish Police can grant her some kind of temporal permission to travel during those days. Fortunately, Mia got a temporal passport and took the flight to Peru the next day, on 25.12.

I love being in Lima during the Christmas season. It’s shiny and not too hot but more importantly, the traffic! As people are already on holidays it is so easy to move from one place to another and I feel that for those few days only, Lima was like it used to be, accessible by any means.

During those days we moved a lot across the city, especially touring around known and new third wave Cafés which are constantl

y popping up in the coffee scene of the Capital. Most of these new Cafés flourish in the districts of San Isidro and Miraflores, the most attractive districts of Lima. You could think that drinking a good cup of coffee should be fairly cheap in a city like Lima, being Peru a coffee-producing country. Yet, you will be amazed to hear that in many cases coffee drinks are more expensive than in e.g. Helsinki and for sure much more expensive than in Italy itself. An espresso could cost 1.5e and cappuccino and Latte up to 3e. There are some reasons for such prices. First, the third wave coffees need good coffees that require rewarding the farmers with premium prices. Coffee consumption is not so high in Peru and that also means higher prices on drinks to make business sense. However, I believe that another strong reason for such high prices is the high rent in commercial zones which has skyrocketed in the last 10 years.

On the road to GRAN PALOMAR 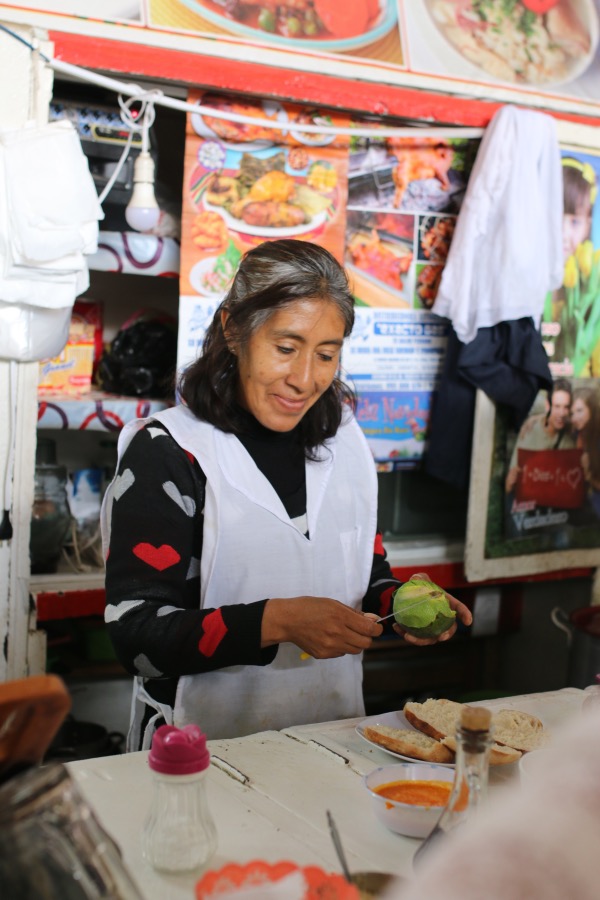 On the first days of January, we departed from Lima to the region of El Palomar, to visit our dear friends who produce our best seller Gran Palomar. To reach the village is a must to pass by the cities of Tarma and La Merced. Both cities are just at 2 hours’ distance from each other but they are so different in terms of cuisine, geography, and culture. Tarma is located at 3100 masl and we decided to stay one night there and walk around its traditional streets. Tarma is a milk-producing region and famous also because of its flowers.

The following day we arrive at the village of El Palomar. It does not pass more than a couple of minutes to say hello to people that we know already for quite some time. We then leave our things in the small and only hostel that the town has. “The members of the Cooperative are waiting for you in the processing plant,” says Dante Pallardel, the manager of the Cooperative and an old good friend. He has been carrying the big responsibility of keeping the Cooperative united and motivated until now. A man of few words and good moral values and always concerned about the future of his people. I am not exaggerating by saying that without Dante’s contribution we would not be enjoying such a good coffee in Finland.

We took a truck to the processing plant which is just located a few minutes from the town but, before our arrival, we could hear already voices of children and adults and a voice coming from a speaker trying to orchestrate the event. The producers have been waiting for us for some

time and we are ready for the welcome ceremony. This ceremony has not changed much across the years. The cooperative follows very formal protocols where different members of the board are given time for a short speech about internal issues and their Finnish guests. We also thanks to them for a new good year of cooperation. This time we brought to them the good news: thanks to the Lord and their own efforts, our sales of Gran Palomar have increased considerably in the past year, all this despite the hard competition. We did mention to them what many customers have said about Gran Palomar, that has it all because it is organically grown, sustainable and taste just delicious. We finish our meeting with some lottery of food baskets donated by us and also we then spend time talking while drinking a cup of chocolate and panettone, the traditional food during Christmas time.

The Women of Gram Palomar

After the celebrations, Patricia Rodriguez, wife of the President of the Cooperative show us proudly their roasting machine. She is leading the women section of the Cooperative and has tried to find with them alternative commercial activities than growing coffee. We noticed her curiosity and enthusiasm as many years ago when we donated an espresso machine to the Cooperative and she was the first one jumping on the machine and trying to learn how it works. The roasting machine has been used to generate resources for roasting services as many producers also want to sell their own coffee in Lima. Besides this activity, Patricia told us also that they want to grow their own coffee carefully and offer as a special selection.  We were so glad to hear that. We want to be part of this project and we offered them our desire to be the first customer of their coffee providing they succeed in obtaining a good quality product. So, this year, our Gran Palomar women version will arrive in Finland. Epic!

It was so comfortable to spend time with the producers. As a matter of fact, after the house of my parents in Lima, this village is our second place where we spent most of the time in Peru! We left the village with good news for both this year. This year will be the first time that we will order more than a container from them and will also include some micro-lots, from specific producers and of course, the special selections of the Women coffee!

Team Peru is back in Finland now and if all goes well I should be having a short visit to them on July.

FREE SHIPPING for orders above 69e! You can also pick up your order from our Coffee bars:
Töölö, Otaniemi, Lohja